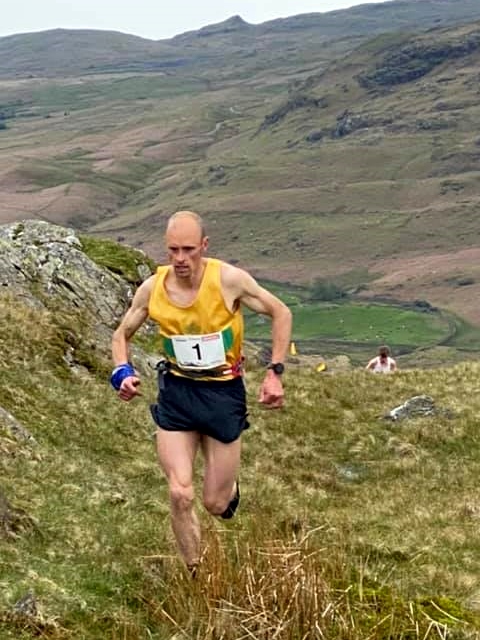 Thank you to everyone that turned out for the first race of the BOFRA season, Coniston Gullies.

The summer fell running season re-opened with a bang at the system jolting race that is Coniston Gullies.  To add to the enjoyment, recent Cumbrian rain ensured several water features on the track marking the start and end of the race.  Not satisfied with making the track muddy and interesting, the rain also made the steep rocks and grass treacherous underfoot.

The race starts deceptively on the relatively flat, but muddy and rock strewn track at the base of Pate Bield but soon shows it’s teeth with a sharp right turn up Long Crag.  Before the unwary have chance to acclimatise to the new conditions, horizontal running becomes near vertical climbing.  From here until the top, it is not running speed but thigh strength and the skill of hand over fist crawling that count.  A true lung-inverter of a race, the scramble to the top is unrelenting and not for the feint hearted or unfit!

Reaching the summit at Yew Pike Is an achievement in itself.  As if the fell appreciates this achievement, racers are treated to a relatively flat wander across the fell top before the descent commences.  Whilst it returns via a different route, the clue is in the name of this race – gullies – as runners must now negotiate their way down a narrow steep sided gully that offers a bit of everything underfoot.   The descent is a true “brain off brake off” near vertical drop, kicking off with a jump from an outcrop and soon becomes a scree slope.  Just as your feet get used to the unique form of fell skiing, grass emerges to trip you up, requiring a change of technique.  It continues in its technical, ever changing nature until racers again meet the track where burning thighs are forced to sprint back along the track, through deep puddles, to the very welcome finish line.

Despite the poor weather forecast, 84 eager senior runners and 119 hardy juniors toed the start line champing at the bit to go.

During the senior race, the front runners chopped and changed with Staffordshire Moorland’s Simon Bailey and Buxton’s Finlay Grant battling it out until the bitter end for first place.  Bailey just gained the upper hand to win in 14.29 mins, a mere second ahead of Grant, 2nd.  Local favourite, Wharfedale Harriers’ Ted Mason finished in 3rd place (15.01).

The U17 race follows a different route up Mouldry Bank to Rascal How and back.  While less technical than the senior race it is no less challenging a climb for these younger runners.  The boys race was a Helm Hill 1,2,3 as Dylan Cater won (9.49) from Henry Hunter, 2nd (9.58), and Alex Tallon, 3rd (10.22).

Chasing the boys all the way was winner of the girls’ race, Wharfedale Harriers’ Amelie Lane.  2nd overall to the summit, Lane finished 3rd overall to win the girls’ race in 10.04 in a nail biting sprint to the finish with 2nd girl, Harrogate Harriers Eve Whitaker (10.04).  3rd girl was Leven Valley’s Georgia Bell (11.48).

The U14 race follows the bottom part of the senior route and the boys’ race was won by a good margin by Wharfedale’s Tom Hooper (6.03) from Settle Harriers’ Jack Sanderson, 2nd (6.14), and Keighley and Craven’s Ewen Wilkinson, 3rd (6.25).

The fiercest race of all is always the U12 race.  These eager young runners cannot wait to attack the fell and this race was no exception despite the girls and boys running separately this year.  Both boys and girls sprint off and up the fell side like there is no tomorrow.  In the boys’ race Ambleside’s Zeke Sumner showed everyone a clean pair of heels to win in 4.21 from Leven Valley duo Sam Oldham, 2nd (4.32), and Reuben Eley, 3rd (4.42).

The U9 race might be short and the runners might be young but they are not short on competitive determination.  Never underestimate this band of teeny racers!  Keeping podium finishes in the family, Helm Hill’s Joss Jebb won the boys’ race by a good margin, in 3.34, from 2nd placed Ambleside’s Kit Evans (3.52) and 3rd placed Settle’s Callum McGoldrick (4.14).

Giving the boys a run for their money was girls’ race winner, and daughter of senior men’s winner, Staffordshire’s Bleu Bailey in 4.05, closely followed by Ambleside’s Isabel Sumner,2nd (4.07), and Hannah Nicholls, 3rd (5.11)