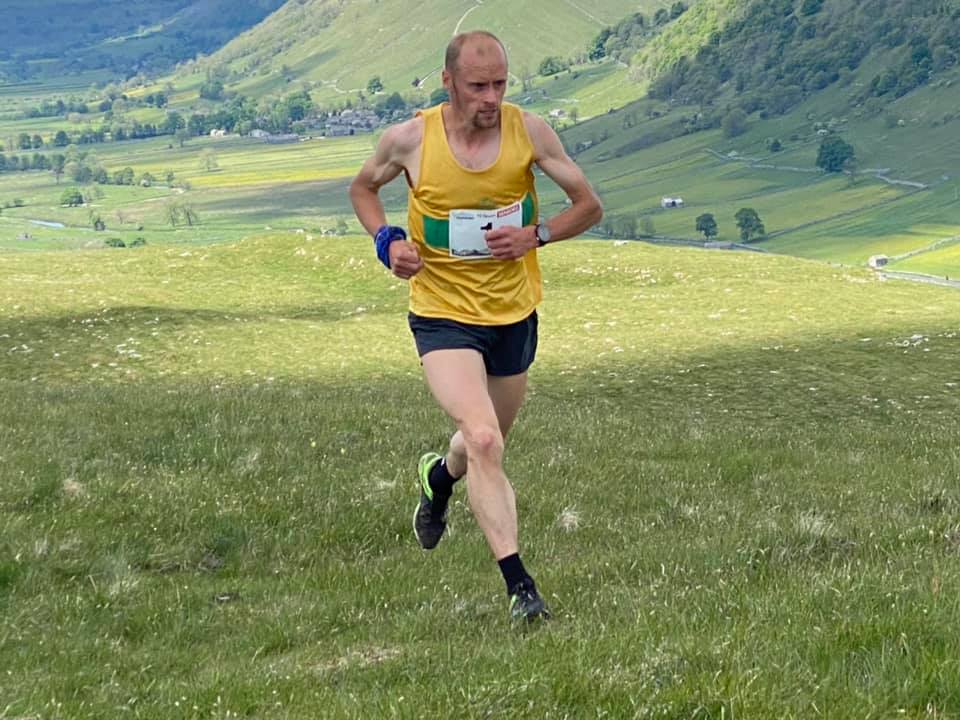 In a year where fell racing has to still fully get going again it was great to see 112 seniors and 157 eager and enthusiastic junior runners toe the line to start.

God’s Own County provided the perfect backdrop of sunshine and beautiful scenery for this year’s  short, sharp, Kettlewell Fell race.

All races start with an adrenaline fuelled sprint to the gate out of the cricket field.  Shortly after leaving the cricket field, all courses take a sharp right turn, over gnarly loose rocks, to enter the field at the fell base.  Runners now race along a flat track before the steep grassy incline to “the chimney” and the first false summit.  After clambering and climbing through the chimney the course flattens off before the 2nd of three climbs.  Once over the 3rd false summit racers are allowed the luxury of a relatively flat though tussocky skyline trot, at the edge of Middlesmoor Pasture, before the sharp, varied and technical descent.  The descent starts with a small cliff edge before competitors negotiate the scree at Gate Cote Scar.  What follows are rocks and steep grass banking, to test all skill levels before the flat run back along the track, sharp left turn over the gnarly loose rocks, and mad dash across the cricket field to the finish line.  The junior races follow the same outward route as far as the chimney summit, then turning at various points to return via the same route as the senior race.  Only the very youngest of runners in the U9 race are denied the climb through the chimney and chance to launch themselves from the cliff edge!

Staffordshire Moorland’s Simon Bailey showed everyone yet again that he is a running force to be reckoned with as he shot off like a bullet and was already in the lead at the summit with Wharfedale Harriers’ Ted Mason and Calder Valley’s Alex Whittem following in his wake.  Despite some varied route choices on the descent, the finish order did not change with Bailey taking the win (11.36) from Mason, 2nd (11.40) and Whittem , 3rd (12.17).

In the ladies race, Howgill Harriers Elsie Butler was first to the summit followed by Skipton AC’s Hannah Cairns and Edinburgh University’s Abi Plowman.  However, the varied demands of the descent altered the rankings somewhat as Butler won, (13.33) from Todmorden Harriers’ Annie Hassel, 2nd (14.34), and Harrogate Harriers’ Lex Whitaker, 3rd (14.42).

The U17 race follows the same course as the senior race allowing some interesting comparisons to be made.  Wharfedale’s Amelie Lane was first to the summit, leaving the rest of the field trailing behind her.  However, on the descent the first 3 boys showed their dare-devil brinkmanship to over-take Lane before the finish.  Settle Harriers’ Dougie Seggar-Staveley won the race (13.19) from Ilkley Harriers’ Sam Bentham, 2nd (13.33) and Calder Valley’s Charlie Pickens, 3rd (13.47).  Finishing 4th overall, Lane won the girls’ race in a time that would have placed her 2nd in the ladies race (13.51)!  Harrogate Harriers’ Eve Whitaker took 2nd place (14.44) from Leven Valley’s Georgia Bell, 3rd (15.23).

The shortest race is the U9 race but it is also one of the most fiercely competitive as these tiny athletes fight all the way to the finish.  Helm Hill’s Joss Jebb came home victorious (5.40) adding yet another trophy to the family cabinet.  Settle’s Calum McGoldrick was 2nd boy in 4th place overall (6.42) from Wharfedale’s Harry Newman 3rd, (7.07) in 6th place overall.  Proving that girls are as good as boys at this running lark, girls’ winner, Ilkley’s Harriet Carter romped home in 2nd place overall (5.52) followed by Staffordshire’s Bleu Bailey, 2nd (6.26), in 3rd place overall.  Third girl home was Skipton’s Jaya Benn (6.59) in 5th place overall.

gr8ful  Video of all races